On October 17, the "2019 China Automotive Parts Industry Awards (Lingxuan Award) Ceremony and the 4th China Auto Parts Forum" was held in Beijing. After 3 months of product and technology collection, and through the preliminary and final evaluations of the Lingxuan Award jury, more than 20 award-winning cases were finally selected, covering a total of 5 categories, i.e., powertrain, chassis, body, electronics & electrical equipment and intelligent connectivity. By virtue of its “Qing AI Platform”, PATEO stood out from the more than 100 excellent domestic parts enterprises and won the 2019 Lingxuan Award – Annual Contribution Award for China Automotive Parts in the Intelligent Connectivity Category. As an independent and continuously iterative third-party intelligent voice platform, PATEO Qing AI platform is striving for a goal that is both down-to-earth and far-reaching. It is able to continuously empower the customer and the user to create value for 10 or 20 years, while being able to rely on different technical solutions to help auto enterprises complete their own strategic deployment at different stages by virtue of its compatibility with the more than ten different core voice technologies of the mainstream Internet companies and multiple mainstream mobile phone companies. As the leader of the IoV industry, PATEO has been devoted itself to providing the user with the IoV products that deliver an ultimate experience since the very beginning of its establishment. However, when recalling the development course of the IoV over the past 10 years, all IoV technologies needed to operate with IVI as the carrier, and the user could only get connected with the IoV for a limited period of time. For PATEO, who “knows the Internet better than automakers and understands the car better than Internet companies”, clearly there is a higher goal on the innovative development path of the IoV technology, that is to bring the user the ICV products and services featured by Ultimate Quality, Ultimate Experience and Ultimate Interaction. For the New Baojun brand that was freshly launched this April, in the future it will shift towards intelligent drive, connectivity technologies and intelligent services. At this critical time, the common goals and missions have brought PATEO and New Baojun together, and for the first time, a disruptive IoV product was equipped on the New Baojun.

By installing the PATEO OS cloud on the user's mobile phone, the OS cloud account is made accessible on the mobile phone for the first time, so that the mobile phone is truly integrated into the car, allowing the user to put the car into the pocket, while truly extending the IoV from a 2-hour product to a 24-hour portable one. Inherited from the previous IoV products of PATEO, this disruptive product is called “Qing Mobile”. What it does is by no means simple interconnection, but instead, it replaces the IVI with the computing power and AI capability of the mobile phone; from personalized IVI to individually customized phone, it truly embeds all the capabilities of an advanced smartphone into the car.

Qing AI 2.0 — The First AI-empowered Intelligent System in History that Communicates Like a Human

After achieving the breakthrough of "mobile phone as IVI", what’s coming next is to solve the issues relating to voice interaction. In Jun. 2019, PATEO again launched the Qing AI 2.0 intelligent voice system equipped on the SGMW New Baojun. This is the first AI-empowered intelligent system in the IoV history that is able to communicate like a human. In addition to the globally leading capability of wakeup-free throughout the whole process, Qing AI 2.0 boasts such capabilities as arbitrary interruption, super-fast voice input,

*
messages message sending & receiving all by voice, as well as super strong anti-noise speech recognition (beyond the hearing of the ears of the person sitting in the front passenger seat according to actual test), thus causing another sensation in the industry. 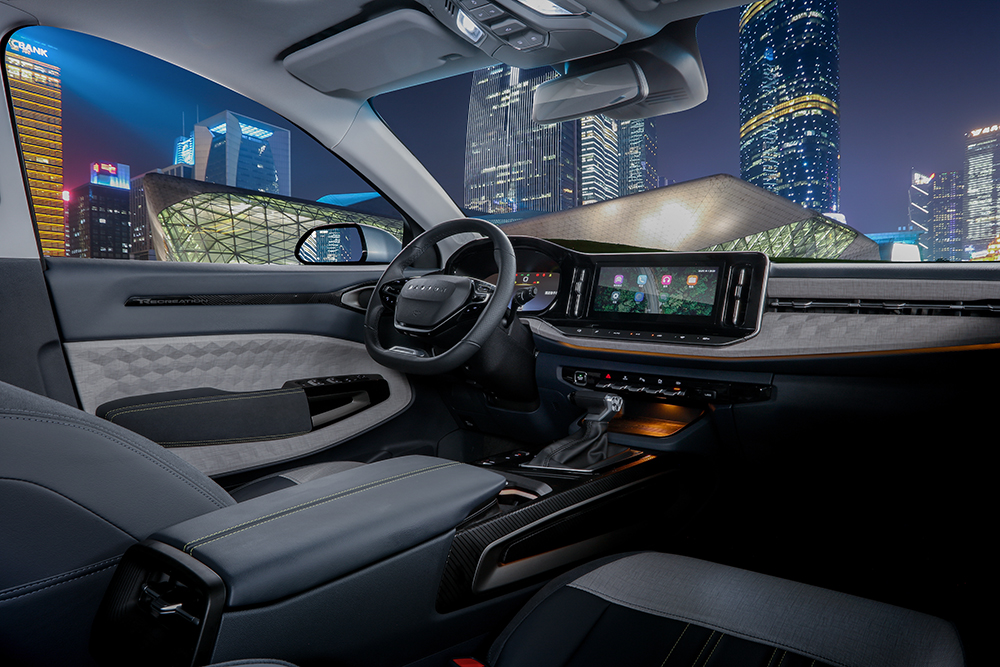 During the onsite demonstration at the launch event, reporters from three media agencies got into the New Baojun with Ken (Yilun) Ying, the founder of PATEO, to experience the intelligent voice interaction, and they felt that “the response is very fast”. Onsite data showed that AI 2.0 was able to perform 19 voice navigation tasks in 54 seconds, while, by contrast, a luxury brand sedan only finished one round of interaction in 56 seconds. At the site of the recent Voice of Hotshot event by Autohome, after the honored guests from Autohome experienced for themselves the Qing Mobile IoV equipped on the New Baojun RM-5, they were also unsurprisingly full of praise for this portable IoV system.

“The speech recognition rate of the car is relatively high, and such a high recognition accuracy makes it convenient for sending long voice messages.”

“Voice control has left a deep impression on me. For example, its response speed and the wakeup-free feature are really amazing.”

"In general, there are very few voice systems that are as responsive and accurate as the Qing Mobile. It does not pose an additional burden on the IVI hardware, but allows your mobile phone to achieve some computing features through certain protocols."

“It responds faster than other systems, and its sensitivity is also very good when you touch it with your finger. The entire system is very easy to use.”

“Its response speed is extremely fast, which is ten times faster than that of ordinary navigation systems and IVIs.”

At the Dongfeng Fengshen (Aeolus) Yixuan Launch Ceremony in Sept. 2019, PATEO again demonstrated the Qing AI 3.0 intelligent voice system in a forward-looking way. Compared with Qing AI 2.0, Qing AI 3.0 is able to communicate with ultra-long speeches and complex semantics like a real human does. No matter how the dialogue content changes, how complex the sequence and turns of dialogues are, how the dialogue logic is layered and progressive, or whether there is a large amount of colloquial and irrelevant information in the dialogue, Qing AI 3.0 can always accurately identify and recognize the core content of the dialogue. In particular, it is able to directly anticipate the real needs of the user for the air ticket, high-speed train, hotel, restaurant, shopping, movie, express delivery, mobility service, etc., and provide corresponding booking and payment services, which used to require dozens of operation steps on the mobile App or even constant switches between several different Apps. During the period of great changes in the automotive industry when various innovative technologies emerge one after another, parts companies are also the daring vanguards in this wave of changes, faced with a series of challenges brought about by the “New Four” (CASE – Connected, Autonomous, Shared, Electric) trends. PATEO has always been leading everyone in thinking about the industry trends with an innovative spirit. As for how to continuously bring a better experience to the user, PATEO founded in 2009 has always been adhering to the concept of pursuing “Ultimate Taste”, “Ultimate Experience” and “Ultimate AI", and has now become the IoV enterprise that boasts the highest automotive customer share and the most innovative team in China, with comprehensive IoV service offerings ranging from intelligent OS and big data, to CP/SP integration & operation, map engine software & cloud architecture, embedded voice, and cloud platform solutions, etc.

The continuous iteration of the PATEO Qing AI platform to empower the customer and the user for value creation is exactly a proactive move made from the needs of both the automaker and the vehicle owner in the face of the Age of Mobile Internet & AI. The in-depth cooperation between Shanghai PATEO and New Baojun has fully confirmed the Intelligent Connectivity DNA of the New Baojun brand and extended the intelligent features of Baojun vehicles in the future, while providing a valuable evolutionary paradigm for the transformation and development of more traditional industries in the new era. Just as the brand vision of New Baojun – “Create a New Mobility Life” – indicates, the vehicle, people, brand and eco service providers will create a new operation model that is iterative, thoughtful, growable and personalized through connectivity in the future.