For the first time, the Internet in the next era will enter the traditional industries from the Mobile Internet, and the Industrial Internet will be the largest tipping point. September 16-17, hosted by the Shanghai Municipal People's Government and the Ministry of Industry and Information Technology, and organized by the Shanghai Municipal Commission of Economy and Informatization and the Jiading District People's Government, the 2019 World Autonomous Vehicle Ecosystem Conference was held at the Shanghai Automobile Exhibition Center. With the theme of “Co-creation, Co-building and Win-win”, the Conference aims to build the most authoritative exchange and cooperation platform in the fields of Intelligent and Connected Vehicles (ICVs) and smart transportation in the world. William (Weilin) Lai, Vice President of Shanghai PATEO, attended the conference and delivered a keynote speech.

Industrial Internet will be the largest tipping point

During the past 100 years of development, companies on the Fortune Global 500 list, including those in the science & technology and energy industries, have undergone earthshaking changes with the vicissitudes of time: traditional industries are gradually being changed by new technologies and new trends. William believes that the Internet in the next era will, for the first time, enter the traditional industries from the Mobile Internet, and the Industrial Internet will be the largest tipping point. There will be many changes taking place in this process, while the IoV filed that PATEO is specialized in is right on the wave of the times, where singular points interact with one another.

At the same time, in the coming age of IoE (Internet of Everything), the most remarkable sign is the smart life brought by the smart city, smart car and smartphone. In this process, the smart car happens to be the core that keeps the smartphone and the smart city connected. William shared on the site, "In the next generation OS, more peripherals and sensors can be sensed. You can call the camera of a drone when you are at home, or call a camera in your house when you are in the car, which is completely different from the current interaction. When the phone and the car are connected as a whole, our way of thinking will, to a large extent, be changed.”

“For example, as for mobile phone, we have been working with several mobile phone manufacturers lately. We are working on a capability that when I shake the phone, it will show a card, so there’s no need to open the application software. At this moment, you can get the car charged and washed; if there’s a dinner at the Expo Center at 9:30 in the evening, it can also help me call a designated driver in the meantime. Now, the requirements for the map, car key, payment and other related service content will be integrated into the service platform. Seemingly, there’s no change in such a life experience, but let’s take designated driving as another example: in the past, we had to make a phone call first, and before the meal ended, there would be an incoming call. At a certain location, we had to find the designated driver, because we didn’t know where he / she was. Next, we might have to lead him / her to the location where the car was parked, which might be far away, and we had to re-heat or re-cool the car in winter or summer. But, in the future, our designated driver will be able to find the car all by himself / herself according to the data we’ve sent, and open the trunk to put the tri-scooter in. After you get downstairs, you will find that the designated driver is already there waiting for you in the car. These small changes are what AI can bring us.”

Therefore, this is right the opportunity brought by the smart era of IoE to the IoV industry, and also the opportunity brought by the objective needs for smart city construction to PATEO. With the 5G era increasingly approaching people's daily lives, autonomous driving and Intelligent Vehicles (IVs) have become the most typical applications of 5G technology. The model of interaction of singular points – i.e., the smartphone and the IV working together on the smart city – is becoming increasingly clear, while the future of smart mobility and smart life will precisely stem from the industrial revolution triggered by this interaction of singularities. 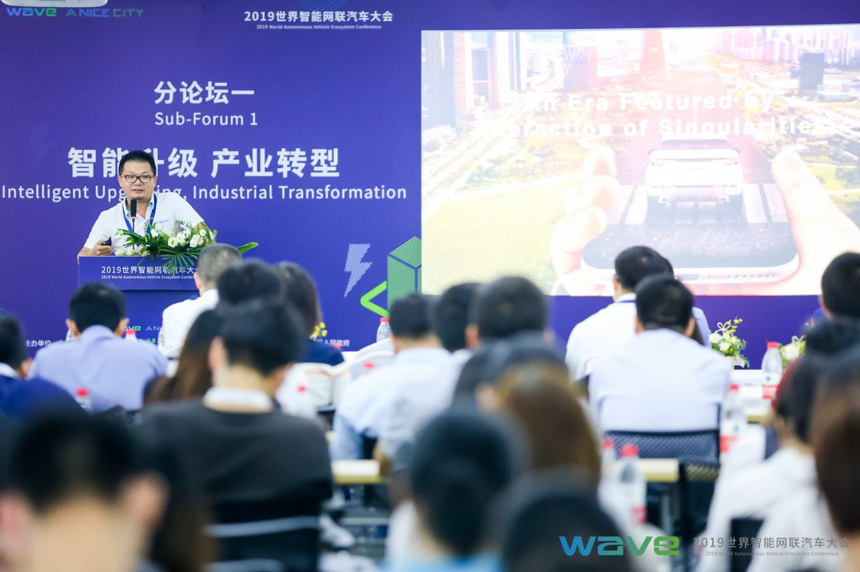 Innovation is the foundation for ultimate experience

Founded in 2009, Shanghai PATEO is now the most innovative IoV company in China. The IoV sector it represents is experiencing rapid development and evolution. Adhering to the concept of “Ultimate Quality”, “Ultimate Experience” and “Ultimate Interaction”, it has already developed into an IoV enterprise boasting the largest automotive customer share and the most innovative team in China. Innovation is the DNA of PATEO, while the IP data is an important criterion for measuring technological innovation: In recent years, PATEO has invested 35% of its revenue into R&D every year, totaling CNY 1.76 billion, and has filed for more than 3,050 IPRs, 85% of which are invention patents. At the same time, it made the list of the China’s Top 500 Companies by Patent in this July.

PATEO's technological innovation is user experience oriented, and is initiated from the optimization of details. In terms of human-vehicle dialogue alone, through the technical assistance of PATEO, it has been realized that the user can directly issue a command to the vehicle at a fast speech rate without uttering a “wakeup word”; no matter under what circumstances, the windows are open or the music is being played loudly in the car, the system is able to quickly capture and understand the true intentions of the user, and achieve the most immediate voice based vehicle control – This is what AI is like today.

At the site of the Conference, William also shared with the guests the charm of PATEO's latest developed Qing Mobile IoV technology, the fastest IoV in history that puts an IV into the user's pocket and deeply embeds the smartphone capabilities into the vehicle to keep the IoV hardware always up to date. The user can open the car door by shaking the phone, thus bidding farewell to the traditional key. This is the first time that the smartphone and the IV are fully connected, and the computing power of the mobile phone, including the AI chip, combined with all scenarios inside and outside the vehicle, is leveraged to extend the connection between the user and the vehicle from 2 hours to 24 hours, thus realizing instant iteration and always staying online. For AI to be implemented in the field of the IoV, technology will of course become a hard-core demand. PATEO possesses a complete set of platform capabilities. At present, it has integrated the 9 technology platforms of the OS, the voice, the map and the cloud, etc., that form the entire platform ecosystem capability of PATEO; secondly, PATEO has not only reached strategic cooperation with players in various industry sectors, such as Suning, Baidu and Ping An, but also established long-term partnerships with brands like Bentley, Porsche and Lamborghini. It is the open ecosystem that has given the industry more opportunities to help promote industrial upgrading and development.

During his onsite sharing, William also mentioned that PATEO will launch the next-generation AI platform, the Qing AI 3.0, next year, which is able to communicate in natural language like the human being, and carry out multiple complicated commands, while deepening the emotional communication experience of the user during drive / ride and completing the perception and prediction of the environment both inside and outside the vehicle by combining with the inside and outside cameras as well as the different sensors located in other parts of the vehicle.

Any good AI product, from conception to practical mass production, probably requires a very long R&D process, and from the perspective of applications of scenarios, hundreds of rounds of selections and eliminations are required to ensure survival of the fittest, then the large-scale verification can be passed, and the universal value of the AI product can be finally proved. Therefore, with regard to the field of the intelligent IoV, the abrupt rise based on the profoundly accumulated strength, vertical in-depth cultivation and horizontal open ecosystem of PATEO will undoubtedly become its most unique value in the field.

In 2019, the key period for the switch between old and new momentums of the auto industry, the development of the ICVs is a great opportunity for the China's automotive industry to realize "overtaking after changing the lane" and thus become an automotive power, and also an important way to build a smart economy, smart society and smart country. The IoV industry represented by PATEO will further promote the transformation and upgrading of traditional industries, such as automotive manufacturing, retail and insurance, by leveraging its own innovation & creation, open ecosystem, platform capabilities and technical barriers, thus bringing more disruptive imaginations to the construction of the future intelligent transportation.