Company News
Company
Five Factors Accelerating the IoV Industry Transformation, The Historic Opportunity Has Emerged
12/21/2018
BY CHEYUN.COM
9053
Nowadays, an increasing number of auto enterprises and consumers are expressing their urgent need for vehicle connectivity. Recently, the next-generation Mercedes-Benz A-Class has made its global debut. As the first Benz model equipped with intelligent system MBUX, it is obviously intended to cater to the tastes of young consumers as well as the ever-changing market.
At the beginning of 2018, KPMG released the China Leading Auto Tech 50 report, mentioning some trends in the future development of automobile, which are similar to the four ACES trend construction proposed by China, i.e., Automated, Connected, Electric and Shared (ACES) vehicles. These four trends represent the direction for the future auto industry, but are characterized by different development focuses and paces: Electrification is already in progress, intelligentization and sharing are the trends, while connectivity is thriving with more possibilities and opportunities.
Internet technologies and solutions are not yet mature. The seamless interaction of HMI, the integration of smartphones and HMI, as well as the IoV-based onboard service features are far from being fully developed. The value created by the interconnection features has not been fully explored, and the market and consumers have insufficient recognition of the value of the IoV service. How to form a closed loop of the value chain to, on the one hand, satisfy user needs, offer valuable services, and allow the user to accept products and pay for them willingly, and on the other hand, achieve stable business connection and effective data acquisition, has become the biggest challenge for the IoV.
To achieve the above goals, five key factors are essential:
1. Broad market space for increment
2. Strong OEM demands
3. Addressing users’ rigid demands
4. Integrated IoV suppliers
5. High-speed communication network
Factor 1: Broad market space for increment
According to statistical analysis by China Association of Automobile Manufacturers (CAAM), from Jan. to Oct. 2018, passenger vehicles witnessed a total sales of 8,091,100 units, among which 7,208,000 were produced by the top ten automakers, accounting for 89.08%. China is a fast-growing auto market where all players have been sharing the cake of market growth, be it a self-owned brand or a joint venture brand. However, among these sales champions, there’s still a lot of room for improvement in vehicle connectivity.
The sales performance of Volkswagen Lavida has been pretty good in recent years – it has been topping the sales rank since 2013, but even for the latest 2018 Lavida, the intelligent drive navigation package (containing 8-inch color touchscreen / real-time traffic navigation / online map update / natural voice control / CarLife, CarPlay & MirrorLink to mirror phone to car display / USB Ports / Bluetooth features) is still listed as an option.
The same is true with Excelle GT / XT. Although it was officially announced this year that all users equipped with connectivity applications would be provided with the lifetime free service of enjoying 24G “OnStar connectivity application data traffic” per year, which fully covers connectivity Apps except Wi-Fi hotspot sharing, and allows the user to bid farewell to "anxiety about traffic" and fully enjoy the fun of cloud-based interconnection, it should be noted that it is only applicable to models equipped with connectivity Apps. The 2019 18T Interconnect Flagship edition doesn’t offer the new-generation eConnect intelligent interconnection system as a standard configuration, but continues the configurations of the 2017 and 2018 editions.
Similar situation is also very common among other vehicle models, which means that there is still a large space for increment in the proportion of connectivity features as standard among the large number of new vehicles sold each year. In the case that the navigation and the center console screen are also optional, the application of a mobile phone to replace the connectivity features still exists. At present, a vehicle is generally connected via hardware terminals with 2/3/4G communication modules, such as OBD, IVI and T-Box that are more often factory-installed.
Behind the sales figures hides the vast space for growth in the IoV. On Dec. 29, 2017, the Ministry of Industry and Information Technology (MIIT) and the Standardization Administration of the People's Republic of China (SAC) jointly issued the National Guidelines for Developing the Standards System of the Telematics Industry (Intelligent and Connected Vehicles). By 2020, an ICV standard system that can support driver assistant and lower levels of autonomous driving should have been initially established. Given that vehicle connectivity has been elevated to the national level, it is evident how much emphasis is placed on it. The vehicle connectivity rate is expected to rise substantially in the next few years, evidenced by the IHS statistics that by 2020, the number of connected vehicles will reach 523 million, accounting for 47%. By then, the connected car manufacturers will usher in huge market opportunities.
Factor 2: Strong OEM demands
The prerequisite for the IoV is that the vehicle needs to be equipped with a terminal for network connection. In the past, OEMs did not have a strong desire to offer these terminals as standard features, while consumers were not willing to pay for them either. In the context of vehicle connectivity, a multitude of OEMs have one after another chanted the slogan of getting new cars connected, and made early experimental attempts. Note: sourced from the KPMG report
SAIC Roewe RX5, BAIC Senova Zhidao and Dongfeng Aeolus are the representatives of early adopters of vehicle connectivity. Features like a 10.4-inch high-definition capacitive touchscreen, high-speed communication connection (4G communication network, bi-directional Wi-Fi communication), AliOS-based Banma Zhixing solution, OTA update and voice interaction are offered as standard on the full-line RX5 models, but the 4G connected entertainment driving system is offered as standard only on a small lineup of vehicles.
The full-line BAIC Senova Zhidao models are equipped with 4G in-vehicle network, GPS navigation, CarLife mobile phone interconnection, conversational AI-empowered IVI system, a 12.3-inch large center console screen, etc., and the Intelligence MAX, one of its main features, is implemented through an AI-empowered intelligent IVI system jointly created by BAIC, PATEO and Baidu.
The new generation Dongfeng Aeolus AX7 is equipped with the first AI-empowered IVI system in the industry named WindLink 3.0, jointly created by Dongfeng, PATEO and Baidu DuerOS, offering the standard features of intelligent interconnection with iOS and Android phones as well as the 10.25-inch ultra-clear 720p fully-laminated capacitive touchscreen. The LCD instrument cluster is available in two sizes, 12.3-inch and 7-inch. The start, AC, doors and windows of the vehicle can all be controlled remotely; the vehicle location and trajectory information can be viewed on the App; and part of the in-cabin features can be controlled by voice, allowing the personalization service (login to personal account via voiceprint recognition).
When compared with Roewe RX5, BAIC Senova and Dongfeng Aeolus are more cost-effective when it comes to LCD instrument cluster and center console screen, with a higher proportion of 4G configuration, making it more convenient for the user to experience the interconnection features. The successful attempts by these leading OEMs are obviously inspirational and motivational for other OEMs. The new models launched by BAIC, SAIC and DFM are just the representatives. At the same time, more and more autonomous OEMs have indicated that they will gradually provide IoV features as standard on new vehicle models in the several years to come, so as to start sharing the new cake of growth in the IoV.
Factor 3: Addressing users’ rigid demands
Behind the huge sales of products equipped with IoV features, there is the power of the young consumer group, who are more willing to accept new things. At the same time, the actual functional performance is also improving, intensifying the user's desire to use. The KPMG report also shows that the post-90s have gradually become the major vehicle buyers who hope that the level of convenience and service of a vehicle can reach that of a smart mobile device.
It’s learnt from actual research that vehicle owners have been frequently using the voice navigation feature during the driving process, while also having expectations for OTA system update; interaction using the car center console is gradually entering the in-cabin user interaction system, and playing a certain role. Note: sourced from the KPMG report
This phenomenon is quite different from the previous situation where nobody showed any interest in the car center console and navigation, the reason for which is that the technology of the whole IoV industry chain is getting mature, the automotive grade LCD display has been proven, the AI-empowered voice interaction has witnessed significant progress in the context of deep learning, map update is accelerating, and the diversity of in-vehicle systems is increasing. The various factors have contributed to the enhancement of the experience with the IVI mounted on center console, navigation and voice interaction. Users begin to accept the use of in-cabin navigation to replace the mobile phone navigation, which marks that the IoV is helping the owner bit by bit to address their inelastic demands.
Factor 4: Integrated IoV suppliers
The IoV is not a new industry – it has been there imperceptibly for more than a decade. In the wave of vehicle development known as CASE (Connected, Autonomous, Shared, Electric), the IoV sets out anew in the hope of working hard to bring about a turnaround. So, how to fight this battle? The IoV is one of the most thriving and yet most complex auto ecosystems, therefore each party involved should embrace open cooperation and interdependence, and avoid exploring the whole value chain independently.
The entire industry chain involves auto OEMs, network operators, software vendors, content providers, Internet service providers (ISPs), after-sales service providers, and even technology giants. In the process of exploring the IoV operation models, OEMs also need to make adjustments and changes to their organizational structure, development process and innovations in technology. 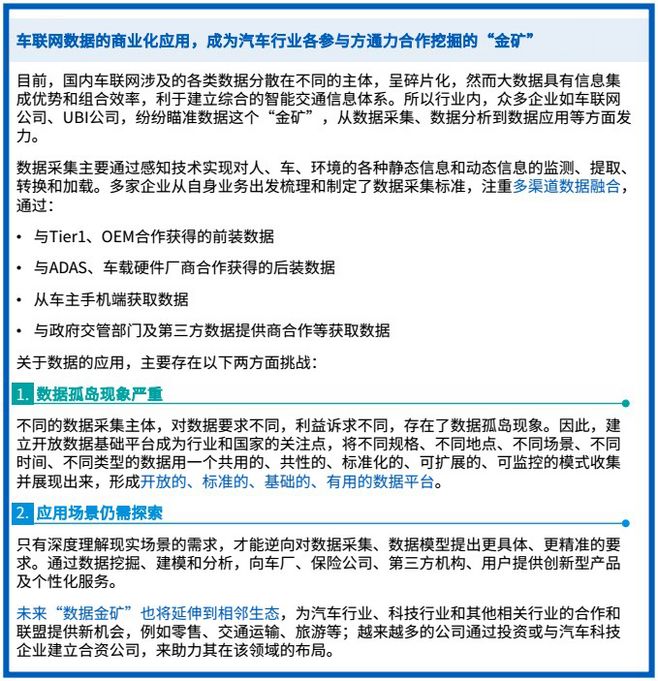