On Aug. 10, 2018, the next-generation Dongfeng Fengshen AX7 was officially unveiled, equipped with WindLink 3.0, the first AI-empowered IVI system in the industry, jointly created by Dongfeng Motor (DFM), PATEO and Baidu DuerOS, and designed to provide consumers with leading AI ecosystem experience characterized by “Speak and Enjoy”.

Undoubtedly, today, the automotive industry in China and even around the world has entered a new era in an all-round way — the era of AI-empowered intelligent vehicle (IV), in which the perfect combination of auto companies + IoV enterprises is riding the waves of our days. Therefore, the capability of the IoV enterprises will to some extent determine the extent to which the IV can truly evolve, and the infrastructure system of the connected car – the onboard operating system (OS) – will become the core element that determines the capabilities and ecosystem of an IoV enterprise. To a certain extent, this AI-empowered IVI system is an epitome of the evolution of China's IV, which reflects not only AI OS and other related AI technologies, but also the mode of collaboration between automakers and the IoV companies, as well as their creative conceptions of the future.

Like smartphones, the core of construction of AI ecosystem in IV lies in the powerful OS, cloud & AI voice, which fundamentally determines the extent of its intelligent evolution and the breadth of its ecological application expansion. The leading capabilities of the AI ecosystem equipped on WindLink 3.0 are mainly credited to the creative IoV ecosystem solution, Qing OS & eco-cloud platform built by PATEO, a global IoV leader, as well as the conversational artificial intelligence technology provided by Baidu DuerOS.

According to the visionary understanding of PATEO, a global leading IoV brand, future IV should be equipped with anthropomorphic full-scenario active interaction and full-scenario application ecosystem. Therefore, based on this, PATEO has provided a custom solution for WindLink 3.0 featured by active eco interaction, which not only makes the human-vehicle interaction more proactive, but also enables the ecological life services available, and hence a versatile secretary.

The powerful and open PATEO Qing OS and the eco-cloud platform provide system support for the solution: PATEO Qing OS integrates the vehicle infrastructure data / user data / cloud interfaces, laying a strong foundation for the implementation of the entire ecosystem; and at the eco-cloud platform level, PATEO offers a solution that integrates the OEM / PATEO / scenario application clouds, then builds the capability for all-scenario AI eco services. It’s also worth mentioning that Qing OS, due to its openness, is able to access the OEMs’ own ecosystem data, and allow them to customize their own business models, which represent greater value for them.

And the conversational artificial intelligence technology powered by Baidu DuerOS, an important part of the whole technical system, mainly solves the problem of human-machine speech interaction. Relying on the powerful algorithms and data of Baidu, the speedy voice faster than mobile phones and the natural speech interaction that can be interrupted come true.

Kai-Fu Lee once said that in the AI era, imagination and creativity are the core competences that determine the height of the future. Indeed, resources and technology can be integrated, but the creativity cannot be “simply copied”.

Then how much change will WindLink 3.0, the achievement of joint R&D by DFM, PATEO and Baidu over two years, bring to the IV? If we use one sentence to describe it, that is: it will help the next-generation Dongfeng Fengshen AX7 to be at the forefront of the age of AI. 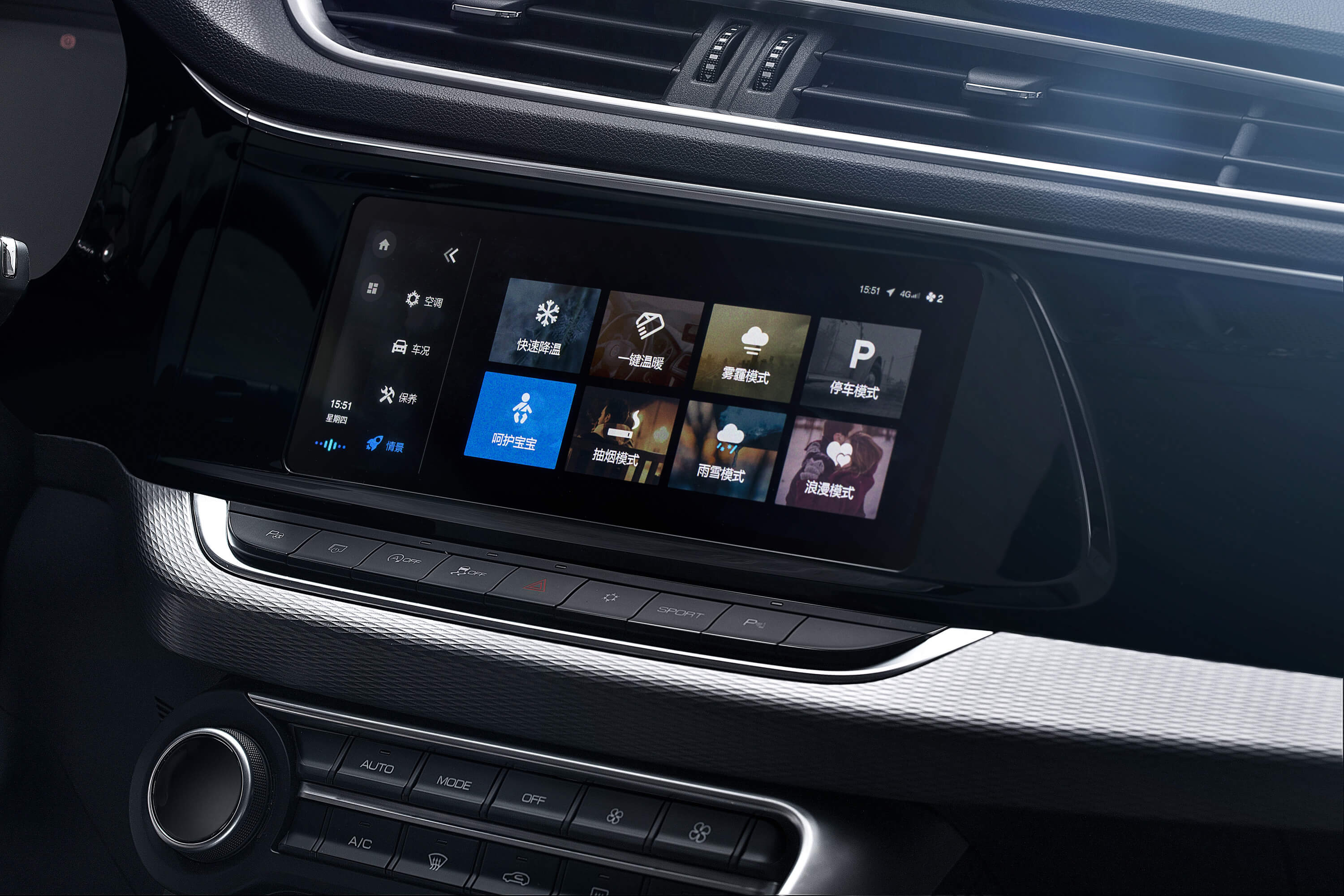 The more convincing argument is that: it not only creates “Six Firsts” – “The First” that is capable of self-learning, “The First” experience that exceeds the speed of the smartphones, “The First” that can understand the complicated human language, “The First” all-scenario ecosystem that allows constant growth, “The First” to stay online & allow imperceptible OTA, and “The First” that implements full-featured applications without downloading the App, but also brings “Four Ultimate” experience – extremely high-end hardware configuration, minimalist UI experience, speedy AI voice, and ultimate application ecosystem, evidencing that it’s currently among the most advanced IVI systems.

Book air ticket and hotel room for tomorrow, then check the weather – this scene must be familiar to everyone, and all this can be done on a smartphone, but what if it happens while driving? Most people will pull over and complete these operations before driving away, which is not only time-consuming, but also unsafe when on an expressway section where no parking is allowed. Whereas on AX7, the operations in the aforesaid scenario can be done via voice commands while driving without having to stop the car.

Apart from the undoubtedly powerful WindLink 3.0, the mode of open cooperation between the three parties, i.e., DFM, PATEO & Baidu, is also noteworthy. It is understood that during this DFM-led cooperation, DFM proposed a preliminary conception based on the prospective competition requirements and user needs, PATEO leveraged its advantages as a leading IoV brand to improve the conception, and tailored forward-looking ecosystem solutions, then Baidu provided technical support in voice AI.

At this moment of iteration in technology and innovation speed-up, openness, cooperation & sharing have become the core spirit of the times, and WindLink 3.0 is precisely a reflection of the openness of the cooperative ecosystem: strategic cooperation with the top-notch in the world on the technology layer, and covering various sectors like hotel and travel on the service layer.

What will the future IV look like when empowered by AI? The answers may be many and varied. From WindLink 3.0, we have seen at least three key words: all-scenario ecosystem, evolution through self-learning, and intelligent & proactive natural interaction – which is exactly PATEO’s interpretation of the future IV concept.

In terms of the “all-scenario ecosystem”, WindLink 3.0 has introduced the superior resources of PATEO Qing OS, Dongfeng Fengshen and Baidu, integrated the products of Suning, Umetrip, Ctrip, Meituan, Ximalaya, ETCP, Kuwo Music, Baidu Map, etc., and built a deep-level open all-scenario application ecosystem, capable of offering users functions like hotel reservation, goods purchase, flight inquiry and entertainment in addition to the basic functions like phone call, SMS and music. It is worth noting that all functions could be implemented directly by voice request without downloading the Apps.

“Evolution through self-learning” is also a surprise, enabling the vehicle to become smarter and get to know you more, and thus offering owners attentive custom services. The WindLink 3.0 system can proactively push personalized services based on the road/vehicle/weather conditions together with the user’s itinerary and food / travel / shopping habits in daily life.

"Intelligent & proactive natural interaction", as the ideal state of AI that has been pursued, enables all-scenario interaction between artificial intelligence and humans, and involves self-learning, recognition, computing and various other capabilities. The human-machine interaction system equipped on WindLink 3.0 boasts a speech recognition accuracy rate of over 97%, capable of accurately identifying user commands and long sentences, reducing the danger caused by instruction errors during driving, and making the interaction more proactive and natural.

Of course, in addition to the above-mentioned aspects, its hardware is also at the leading level: high-performance iMX6 Quad Plus Quad-Core processor, coupled with super-powerful GPU hardware, plus 4G memory + 32G storage space, will eliminate pauses and hesitations with systems even when performing the tasks that require a lot of calculations, such as 3D rendering.

It can be said that in view of the current development trend of IV, only through truly open cooperation between auto enterprises and IoV & tech companies, can they stand on top of tides at the fastest speed and achieve a multi-win situation. PATEO, the owner of the automotive operating system with the highest level of openness, has long been aware of this, and therefore is striving to fulfill the goal of creating “a Workshop for Final Assembly of Internet Capabilities”, aimed to empower the OEMs and offer them forward-looking solutions, and also making great strides towards building a global leading IoV system with independent IPRs.