Yu Kai and Liu Xiande addressed the conference respectively with great enthusiasm. In their address, the two leaders expressed congratulations on the inauguration of the National Center as well as ardent expectations for it to drive the development of the intelligent connected vehicle (ICV) industry, while emphasizing that the testing & accreditation technology research and system construction are of great significance to the healthy development of the ICV industry.

Liu Xiande, Deputy Director-General of the Department of Accreditation, Testing and Inspection Supervision & Management of SAMR addressing the conference

Inauguration Ceremony of the National Center

Zhou Hua, General Manager of Tianjin Automotive Test Center (a wholly owned subsidiary of CATARC, hereinafter referred to as “TATC”) explained the capacity building of the National Center in detail. The National Intelligent and Connected Vehicle Quality Supervision and Inspection Center (Tianjin) constructed by TATC had officially passed the qualification accreditation and review by Certification and Accreditation Administration of the People’s Republic of China (CNCA) and was awarded the Certificate of Authorization in August 2018, making it the first national quality inspection center in the ICV testing field to pass qualification accreditation and authorization, with authorized capacity covering ICV real vehicle road test, simulation test, functional safety test, V2X connectivity & information security test and so on. Zhou Hua said, TATC would, on basis of the National Center, leverage world class testing equipment and experts & talents to better serve the ICV industry, lead the development of testing technologies in the industry, facilitate the technological advancement in the industry, and make due contributions to the rapid development of China’s automotive industry.

Yu Kai, Li Deyi, Lu Xi, Liu Xiande, Zu Yanhui, Sun Gang and Guo Chengming took the stage to inaugurate the National Intelligent and Connected Vehicle Quality Supervision and Inspection Center (Tianjin). At the same time, in order to guide the National Center to better serve the industry, the Committee of Experts of the National Center was established, and Yu Kai presented the letter of appointment to the Chairman and Vice Chairman of the Committee - including Li Deyi - at the inauguration ceremony. 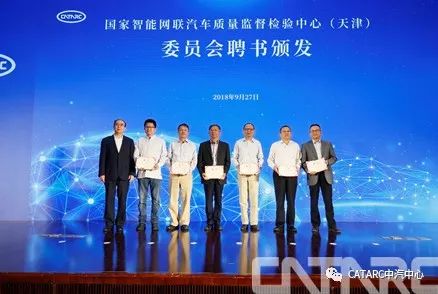 Presenting Letter of Appointment of the Committee of Experts

The development of ICV technologies is inseparable from a tremendous amount of testing and validation, so to build a dedicated testing ground for ICV is of critical importance to the underpinning of ICV standard research, R&D validation, and testing & accreditation. To this end, CATARC and Xiqing District Government of Tianjin Municipality - respectively represented by Zhou Hua and Zhang Hanbing - officially signed a cooperation agreement on the testing ground of the National Center on the occasion of the inauguration ceremony, to commence the construction of the ICV testing ground. Taking the opportunity of the joint construction of the testing ground, the two sides will make concerted efforts to promote ICV development and drive smart city construction, while focusing on the testing ground project to promote industry revitalization, produce aggregation effect of intelligent vehicle / transport industries, realize regional economic transformation & upgrade, create a highly competitive supporting environment for innovation & development of emerging industries, drive industrial agglomeration, and realize economic transformation & upgrade. 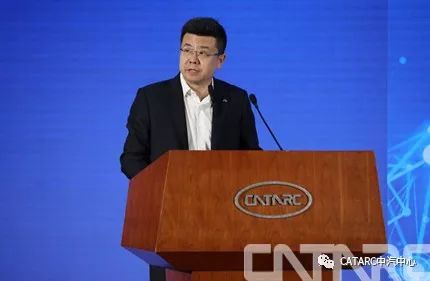 The establishment of the National Center in the ICV product field is an inevitable requirement for the healthy and sustainable development of China’s ICV industry, and at the same time serves as an important source of support for China to actively participate in and lead the coordination of international standards, seize the initiative to set rules for the future automotive industry on a global scale, and thus escort the healthy and orderly development of the ICV industry in China by providing technical guidance, scientific supervision and all-around services.